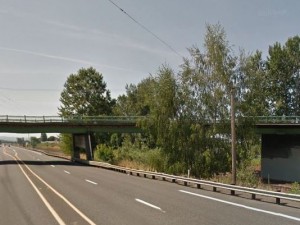 Portland, Ore. — (KGW) Advocates in the Portland bike community are pushing for big changes along a busy road after a bicyclist was hit and killed Saturday night.

Police said a driver under the influence of marijuana struck the 38-year-old man and left the scene.

The cyclist was hit on Northeast Lombard Road, near 42nd Avenue, at a spot where the bike lane striping ends.
“Not only is the bike lane dropping, but essentially the shoulder goes away,” said BikePortland’s Jonathan Maus. “So there’s nowhere to be that’s safe.”

Just one day before the deadly crash, an editor on Maus’s site posted a story about how dangerous the spot can be for cyclists.
The Oregon Department of Transportation is already in the process of examining that stretch of roadway, said spokesman Don Hamilton. But he added that the road itself is old and widening it would be extremely expensive.

Advocates have asked whether eliminating a travel lane would be an option.