Klamath Falls, Ore. – A Klamath County Sheriff’s Deputy may have saved the lives of two people from a house fire early Saturday morning.

Deputy Greg Fox spotted heavy smoke coming from a home on Orchard Avenue near Washburn Way just before 6:am.

“He alerted the residents there appeared to be a structure fire in their home.”  Notes Toni Brimmer of Klamath County Fire District #1.  “He was able to evacuate two occupants, two dogs, and alert dispatch that we had an active structure fire.”

The attic was fully involved upon the arrival of fire crews.

There were no injuries.

Investigators believe the fire may have been sparked by an electrical problem in a bathroom. 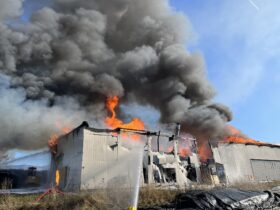