Update (03/22 11:15am) — According to Oregon Parks and Recreation, the bow-section of a drifting boat came ashore north of Coos Bay on Tuesday. Winds and currents pushed the debris north of where it was originally predicted to go.

The section of boat is also smaller than originally expected, measuring less that twenty feet in length. Biologists will take samples, and the debris will then be taken to a landfill.

Coos County, Ore. – A derelict boat is drifting toward a stretch of coastline between Bandon and Cape Arago, and could make landfall sometime late Tuesday.

According to Oregon Parks and Recreation, the debris appears to be the bow-end of a boat, estimated at 25-30 feet in length. There seems to be no sign of any hazardous materials on board.

Oregon Parks and Recreation officials say that the debris could have originated from the 2011 earthquake and tsunami that struck Japan, but that origin has yet to be confirmed.

Once the boat comes ashore, employees with Oregon Fish and Wildlife and Hatfield Marine Science Center will obtain samples from the debris to check for potentially invasive species, and attempt to confirm the boat’s suspected origin. 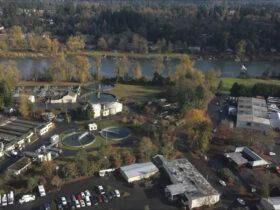