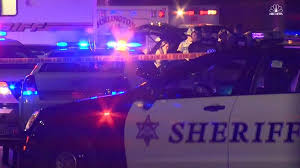 Burlington, Wash. — Authorities said a fifth person has died following a shooting at a shopping mall near Seattle. Police say the gunman opened fire Friday night at a Macy’s store at Cascade Mall in Burlington.

An unidentified male who was shot died early Saturday morning at a Seattle hospital. Four women were found dead at the store.

A manhunt is now underway for the gunman. A state patrol spokesperson said they’re looking for a Hispanic male in his 20’s or 30’s. He was last seen wearing black, and armed with a “hunting-type” rifle. He was last seen walking toward Interstate five.

Investigators said the motive for the shooting is unknown.