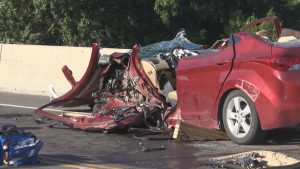 Oregon State Police say 75 year old Norman Guy Shell of Chiloquin was driving the wrong way when he crashed into an oncoming driver.

Shell was taken to Sky Lakes Medical Center, where he later died of his injuries.

The second driver, Natalie Carlson of Glendale, California was also hospitalized, she was listed in ‘fair’ condition Tuesday morning.