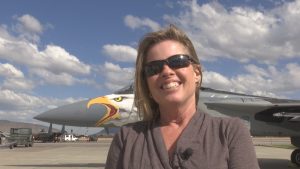 Klamath Falls, Ore. – A Klamath Falls woman is given special recognition from officials at Kingsley Field.

Mindy Surber first organized a triathlon at Lake of the Woods to raise money for the David R. Kingsley Foundation 10 years ago.

Members of the base turned out to say ‘Thank You’ to Surber Wednesday afternoon.

“It is a big surprise – especially since I don’t like to be in the limelight.  I’d rather just go ahead and slip my check under the door and run.”  Laughed Surber.

The Triathlon has raised about $21,000 for the foundation over the past decade.