“I help support folks on the street in every way I can,” said Mimi German, who spearheaded the construction effort. “All these people that are here do the same thing.”

The group announced their intentions in a press release Sunday morning, and stated that the move was in direct response to the city clearing homeless camps around Portland. The structures on the Park Blocks are intended to house people who have been displaced by the removal of the camps.

“It was really early, like 7:45 to 8, when I woke up to them taking my tent,” said a woman who asked not to be named but said was looking for a new place to stay after her camp was cleared. “Just took it down, didn’t look to see if anyone was in there.”

The group faced pushback on Sunday when Portland Police officers and Portland Parks and Recreation staff arrived and wanted to see a permit for the project. People’s Housing Project volunteers cited a piece of Oregon legislation.

“House Bill 4001… allows nonprofits and religious organizations during an emergency housing crisis to provide shelter in the city,” German said. 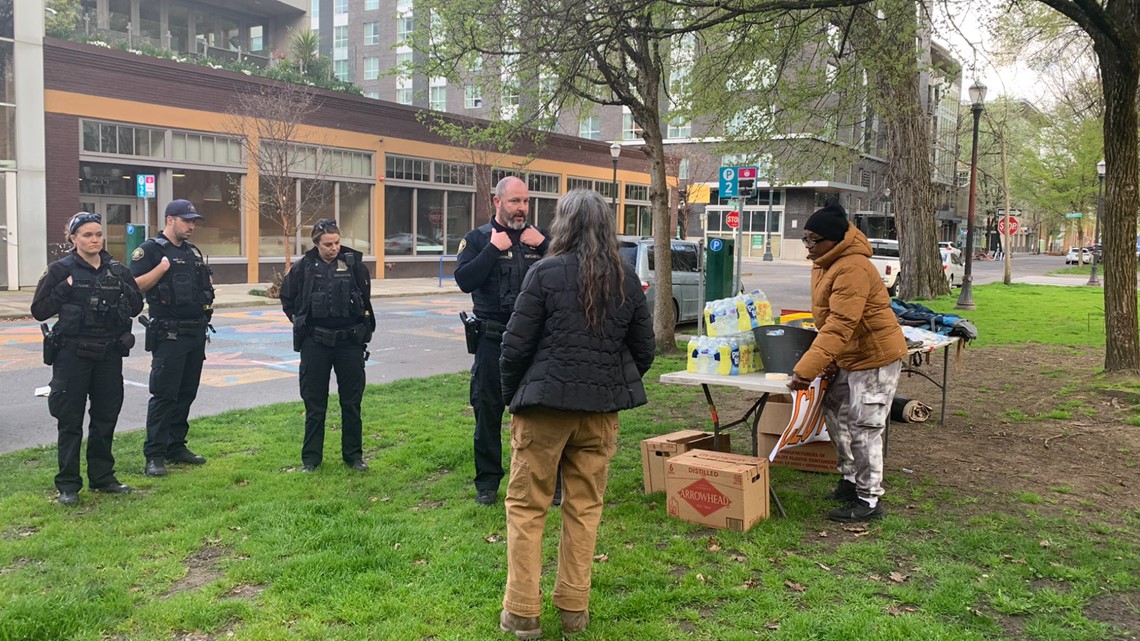 The city workers weren’t familiar with the bill, likely because it isn’t Oregon law. The Ways and Means committee recommended that HB 4001 be passed during the 2020 legislative session, but the legislature adjourned before it could.

A Portland Police Bureau spokesman later told KGW that it did not appear the officers had observed any criminal activity, which means it would likely fall to the Park Bureau to address any permitting concerns.

Portland Parks & Recreation public information officer Mark Ross told KGW on Monday that the structures did not have a permit and were therefore not allowed in Portland parks. The bureau is working to post notices and remove the structures, he said.

Nearby residents had mixed feelings about the project.

“Eighteen years ago, we would walk through this park  with our grandchildren at night and we’d think ‘can you believe how cool this is?'” said Phil Oester, who lives in the area with his wife Debbie.

The Oesters said the neighborhood has deteriorated over the years, with crime, drug use and mental health concerns with the homeless population all increasing.

The couple said they’re in favor of the group providing services and support at the park, “but not to live here,” Debbie Oester said.

Another neighbor, Dave Taylor, said he agreed about the direction of the neighborhood, citing concerns about drug use and homeless residents who need help. He enthusiastically welcomed the idea of the tents.

“That’s awesome, it’s great,” he said, giving a thumbs up.

After the three main tents were up, the volunteers pitched dozens of smaller ones around the park, ignoring calls from police to stop the work, and said they were ready to continue their work around the city.

“We’ll just keep erecting these all around every time there’s a sweep,” German said. “We’ll put more up because the city needs to stop sweeps.”