PORTLAND, Ore. (KGW) — The Portland Police Bureau’s Internal Affairs department is investigating a police training PowerPoint presentation that included a slide with a right-wing meme that endorsed violence against protesters.

The PowerPoint was discovered in September while reviewing documents pertaining to a lawsuit against the city of Portland related to the 2020 protests, according to a Friday press release from Mayor Ted Wheeler’s office.

Wheeler’s office said the city did not immediately release the presentation because it wanted to “help protect the integrity of the initial phase” of the investigation but chose to release it publicly this week because it will be included in an upcoming court filing. 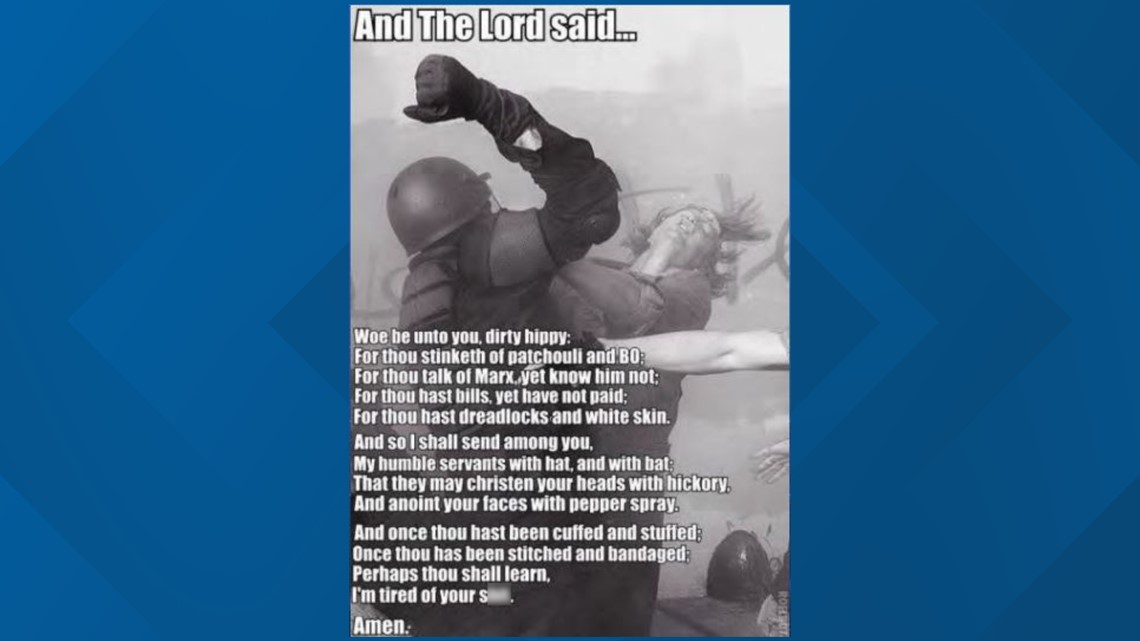 The meme appears on the final page of the 110-slide presentation about police response tactics during protests and riots. The full presentation can be viewed here.

As reported by the Portland Mercury, the website Know Your Meme describes the text on the image as the “Prayer of the Alt Knight” attributed to “Based Stickman,” an alias of far-right activist Kyle Chapman, who previously founded the extremist group “Fraternal Order of the Alt-Knights,” a subset of the far-right Proud Boys group.

Chapman was coincidentally arrested earlier this week, according a report from the Idaho Stateman, for allegedly attacking healthcare workers in Idaho.

The police presentation may have been created in 2018, according to the news release, although remains unclear who added the final slide, when it was added, or if it was used during Portland Police Bureau training sessions.

In a statement, Wheeler said he was “disgusted” by the “offensive content” in the presentation, and in a separate statement, Portland Police Chief Chuck Lovell said it sent a message that was “contrary to PPB’s values and what we are trying to achieve as an organization.”

Wheeler and Lovell both said they could not comment further due to the ongoing investigation.

Commissioner Mingus Mapps also realized a statement on Friday that said, “I am frustrated and disappointed by the Rapid Response Team training document. This team was disbanded, and we are reforming our approach to protests and rioting.”

He went on to say, “the most unfortunate aspect of this is that it takes the attention away from the good work the Portland Police Bureau is doing to address gun violence and increase public safety in Portland.”