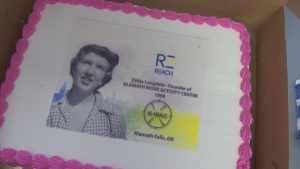 Klamath Falls, Ore. – A Klamath Falls company that provides work and services for the disabled honored one of its founders Friday.

Zelda Langdale started the ‘Klamath Work Activity Center’ back in 1968.

The company has since grown into ‘REACH, Incorporated’.

Zelda was honored by her peers at a noon luncheon.

“I’m very, very, very proud and somewhat overwhelmed – and I don’t come here without a tear.”  Reflected Langdale.  “It’s absolutely beautiful what they have done here.”