While crews are still working to put out the fire, visitor traffic has returned to the Rim Drive.

Adrienne Freeman of the National Park Service explains:  “The West Rim Drive was opened at 8 o’clock this morning, so access is available to everybody.”

The fire is burning in a remote area just southwest of the rim.

The Bybee fire was sparked on July 28th, and has since grown to nearly 2 square miles in size.

“Mostly, this fire was fought by hand crews.”  Notes Freeman.  “They’re hiking down into the bowl every morning, some of them are staying down there overnight.”

But, the fire hasn’t dampened the enthusiasm of visitors to the park.

“We weren’t really too concerned.”  Says Renetta Gilpin of Yorktown, Indiana.  “We figured if something was to go wrong, they would get us out in time.”

“We saw on your news program the status of the fire.”  Adds Richard Benfield, of New Britain, Connecticut.  “And came up today knowing that the road was open.”

While the cause of the Bybee fire is still under investigation, it’s believed to be human caused.

At one point, an ember sparked a fire just inside the caldera rim – and the park remains hazy in some areas.

While the West Rim Drive has re-opened to traffic, visitors will want to keep an eye out for emergency traffic along the road.

About 150 people will remain on the fire for monitoring and mop-up operations.

Park Rangers will be stationed at overlooks to help explain the role of fire at the park. 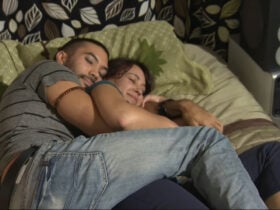