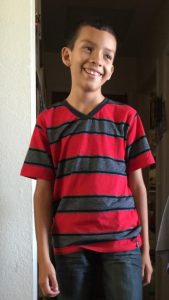 Grants Pass, Ore., — “Anytime we think about him, it’s just laughter, because he managed to get into everything, and he just kinda walked to the beat of his own drum. And he just made you smile when you saw him.”

Those are the words Angela Reynoso used to describe her nephew, Julian Reynoso.

“He was playing and he got a little overheated, and went to sit down for a minute and when they went to go check on him, he just wasn’t responsive.”

With a love for soccer, it only made sense for Reynoso’s team to honor him at the first game after his death.

Wearing black bands on their arms to remember him….

“We’re all sad but he was a great kid, a great teammate and we’re mourning for the family so this is just something we wanted to do in memory of Julian, so we don’t forget the rest of the season that he should be here with us.” said his coach, Chris Borovansky.

The team is trying to focus on being positive, and winning for Julian.

It’s something his family is grateful for, and will always cherish.

“To find out that there was so many people and teammates and friends that loved him so much that they would do this for him, we just thought it was too sweet not to come out and watch them play.”

The team did win their soccer game today, and after all the players signed Julian’s jersey.

There is a Go Fund Me set up for the Reynoso family –https://www.gofundme.com/3qfwfhc