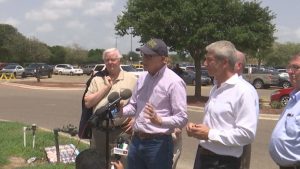 The Congress members came to get a first-hand look at the children refugees at the Casa Padre Immigration Center. They say lawmakers have learned from their mistakes and want to accomplish their main goal of reunification.

Rep. Michael C. Burgess (R-Tex.) said, “I’ve been coming here for five years. This is the most well-run facility I’ve seen in all of my trips down here.”

Rep. Greg Walden (R-Ore.) explained, “We learned from a horrible mistake that was made. We have to make sure it doesn’t happen again. But what our primary goal here now is to get the re-unification done and make sure that as these kids come into the country, they are well cared for and don’t suffer further harm.”

When asked, the committee did not comment if they were working on legislation related to the children refugees they were visiting.