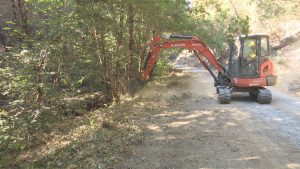 OUTSIDE GALICE, Ore. — Crews are still trying to get a handle on the west side of the Klondike fire but the east side of the fire is proving to be a little easier.

Fire officials say they’ll have full containment on the east side of the fire in the next 24 hours. Since they’re so close to containment, they’ve started the repair process on the land.

While it’s obvious that a fire causes a lot of damage when it burns through a land,  it’s not so obvious that by not repairing the land before rain comes, can be just as damaging.

“The Thomas Fire is a good example, there was destruction, there was a lot of impacts of the fire, very fast moving, there was fatalities associated with the fire itself,” Alex Robertson, Incident Commander trainee with the Northwest Incident Management Team 12, said. “Then weeks, months later, as they had some major rain fall events, they had even more fatalities with the debris flow and flooding problems because of the fire.”

Problems like water contamination and flooding can be caused by not repairing an area immediately.

“Anytime you have a fire, you’re going to have a significant amount of ash fall or just general disturbed soil that water is able to pick up and that will eventually end up in the water systems,” Robertson said.

That’s exactly why crews have to get into the area as quickly as they can and clean up the debris.

“Dozer lines come through and berm up on the side for water, we pull those berms, put outlets in for the water to run off so it doesnt erode and put natural vegetation back on those lines,” Patrick Wiggins, dozer operator, said.

This is all in hopes that their work will protect the community and their water systems.

“It’s always going to happen, there’s no way to prevent all of it from happening specially when you have a high severity wildfire,” Robertson said. “But were trying to get in and do as much as we can prior to these events in order to get as much stabilized as we can and prevent that from happening.”

There is still fire activity on the west side of the fire and that has cause Bear Camp Road to be closed to public travel. The closure applies to the general public but there are exceptions. If you live in Agness and Galice, you can use the road to get to your residence with a photo ID.