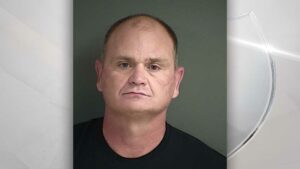 The Douglas County Sheriff’s Office said on October 22, someone said they found hidden cameras in the bedroom of a minor female known to 48-year-old Robert Wayne Roady of Roseburg.

When Roady, a Roseburg VA police officer, was interviewed, he reportedly admitted to placing the cameras in the room of a 14-year-old for sexual purposes.

During the course of the investigation, two other minor victims were identified, DCSO said.

Roady was arrested and lodged in the Douglas County Jail on nine counts of invasion of personal privacy in the first degree. Additional charges are being considered.