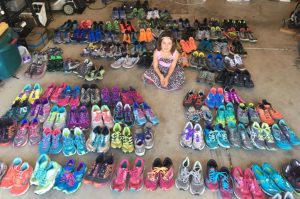 Medford, Ore. —    A southern Oregon running group wants to make sure everyone has shoes on their feet.

More than a hundred pairs of athletic shoes were donated to the emergency room at Providence by the group, Southern Oregon Running Enthusiasts.

The hospital keeps donated clothes and shoes on hand to give to homeless patients who come into the emergency room.

On Wednesday, they were already being put to good use, with one of the hospital’s patients being able to switch out his flip flops for a pair of gently loved running shoes.