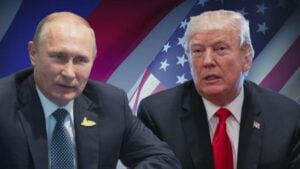 (NBC) – Russian leader Vladimir Putin is claiming first in the race to find a COVID vaccine. But many top scientists, including Dr. Fauci, are skeptical that Russia has done a thorough vetting to prove the drug safe. Meanwhile, the top vaccine candidates in the U.S. and Europe are continuing human trials on a variety of cures for the deadly virus.

It may not be a Cold War arms race, but Russia and the West are clearly in a race to get an effective vaccine into arms of people around the world.

Russia calls its vaccine Sputnik-V, a not-so-subtle reference to its first victory in the early Space Race.

The kremlin insists its vaccine is safe and mass distribution will begin in October for the Russian population. Vladimir Putin’s own daughter has reportedly received the vaccine, developing the virus’ antibodies. But Russia has not yet published any of the scientific data and has not begun critical Phase-3 human trials.

U.S. experts, including Dr. Anthony Fauci, are skeptical. He said, “I hope that the Russians have actually, definitively proven that the vaccine is safe and effective. I seriously doubt that they’ve  done that.”

Dr. Michelle McMurry-Heath represents America’s biotech drug makers. She said, “Well the skepticism is warranted at this point. We really don’t know what it is they’re testing, what it is they’ve seen and at this point is really purely based upon their word and that’s not typically the way reach scientific conclusions.”

Meanwhile, the White House has announced yet another major deal with a drug maker. This one a $1.5 billion deal with Moderna for 100 million doses of its experimental vaccine.

President Donald Trump said, “We are on track to rapidly produce 100 million doses as soon as the vaccine is approved. Up to 500 million shortly thereafter.”

Worldwide, 25 vaccines are now in human trials. Among the leading contenders are Moderna, J&J, Pfizer, Astra Zeneca, Inovio and Novava. Multiple vaccines will likely be needed

Dr. William Schaffner of Vanderbilt University said, “Some may work better in the elderly, some with African Americans or people with Hispanic ethnicity. Some better in children. So when we have different vaccines, we might be able to target these vaccines to be used in those different populations.”

There is concern because it seems the Russians have rushed this without the appropriate due diligence that will undermine confidence in all vaccines. But the United States FDA is insisting that it will not compromise on any of its safety protocols and it will make sure that any vaccine brought to market is safe.