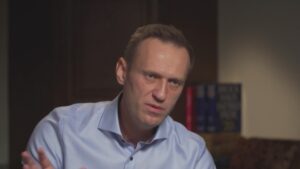 The police detained Navalny after landing at the airport in Moscow Sunday night.

He was returning from Germany, where he spent months recovering from Novichok poisoning last summer.

When he announced his plans last week to return, Moscow’s prison service vowed to arrest him for violating probation connected to an alleged fraud case.

Navalny has dismissed the move as politically motivated.