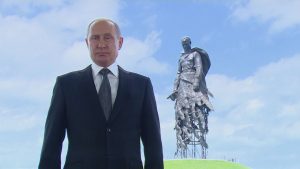 MOSCOW, Russia (NBC) – Russian President Vladimir Putin is making his case directly to the people of Russia as they vote on constitutional reforms this week.

Voters are heading to polling places Tuesday to weigh in on constitutional amendments that would allow Putin to remain in power until 2036.

The nationwide vote will take place July 1, although polling stations were opened a week earlier to prevent crowds on Election Day.

In a video appeal to the public, Putin stood in front of a new World War II monument that was unveiled Tuesday.

He reiterated that the constitutional amendments would only enter into force with popular support, adding that “development” was needed to guarantee Russia’s stability, safety and well-being.

State exit polls suggest the changes will be backed by over two-thirds of voters, allowing the 67-year-old former KGB officer, if he wishes, to run for another two six-year, back-to-back stints after his current term expires in 2024.

He has already led Russia for more than two decades.