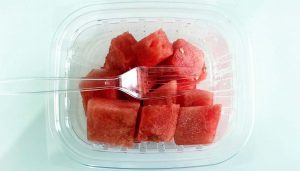 The Oregon Health Authority said the two cases in Oregon appear to be related to Salmonella Newport outbreak where 17 people were infected. Salmonella Newport is a serotype that is reportedly resistant to at least nine antimicrobials.

According to OHA, those who fell ill all reported eating pre-sliced cantaloupe or watermelon purchased at stores under at Winco, Rosauers, and Central Market stores in Oregon and Washington. Stores in those states operating under the Kroger brand umbrella are also implicated, including Fred Meyer and QFC. The two Oregon cases were related to products purchased at Fred Meyer, specifically.

Health officials are advising anyone in Oregon and Washington to throw away any affected product bought between October 25 and December 1. Those who ate the affected products don’t need to see a doctor unless they start to experience symptoms.

OHA said most people infected wish Salmonella experience fever, diarrhea, and abdominal cramps a few days after exposure. Most people recover within a week, but severe infections can occur.

More information can be found at https://www.cdc.gov/salmonella/