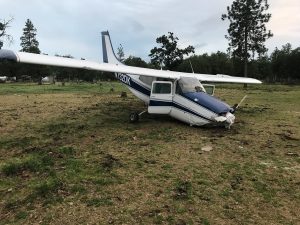 SAMS VALLEY, Ore. –  Two people are recovering after a small plane crashed down in Sams Valley Tuesday evening. The Jackson County Sheriff’s Office says they got a call from a resident on the 4900 block of Dodge Road, reporting that a small plane landed in their yard around 7:20 p.m. They say the plane went down while approaching the Beagle Sky Ranch Airport.

The caller said at least one person was injured. The Sheriff’s Office says the passenger was taken to the hospital by a Mercy Flights helicopter and the pilot went to the hospital in a private vehicle. A dog riding in the plane was uninjured.

The crash will be investigated by the NTSB.