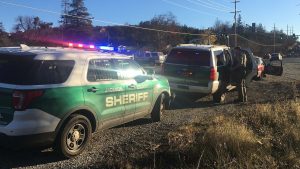 JACKSON COUNTY, Ore. – Police are focusing some of their efforts on a notorious Medford-area roadway.

Traffic issues and crime are a growing problem along North Foothill Road. While the Medford City Council has plans for improvements that include additional lanes, more bike lanes, and a multi-use path, the Jackson County Sheriff’s Office is doing their part with what they call “focused patrols.”

In one instance, a passenger ran away from a car that was pulled over by police. A deputy chased that person for over a quarter mile before he was arrested for a parole violation. Methamphetamine was found in the car and two other people in the vehicle were arrested for parole violations.

Deputies said to “keep an eye out for more focused patrols on North Foothill Road and in other problem areas of the county.” If you think your neighborhood needs additional attention from deputies, call 541-776-7206 to request additional patrols.