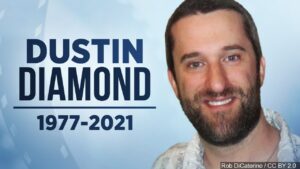 (NBC) – Dustin Diamond, best known for his portrayal of the lovable nerd Screech on “Saved by the Bell,” has died.

A spokesperson confirmed the actor died Monday morning weeks after he was diagnosed with cancer.

His manager says Diamond was taken off of breathing machines in an attempt to move him to hospice care but passed away with loved ones nearby.