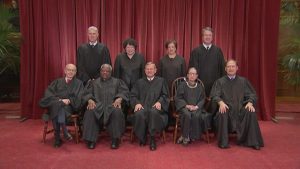 WASHINGTON, D.C. (NBC) – It was a victory for abortion clinics in Louisiana Monday after the Supreme Court struck down a state law imposing restrictions.

In a 5 to 4 vote, the high court ruling put the law requiring doctors performing abortions to have hospital admitting privileges in violation of the Roe V. Wade decision legalizing abortion.

Louisiana Act 620 of 2014 had defined admitting privileges as being a staff member in good standing at a hospital no more than 30 miles from where the abortion is performed.

In 2017, a lower court had granted a permanent injunction saying, in part, that the law provided no significant health benefit, and placed an undue burden on women seeking an abortion. A three-judge panel later lifted the stay, which was then put on hold.

With Chief Justice John Roberts siding with the four liberal justices in Monday’s ruling, he broke conservative rank, having voted in favor of such restrictions in previous cases.

In 2016, the Supreme Court struck down a nearly identical measure in Texas.