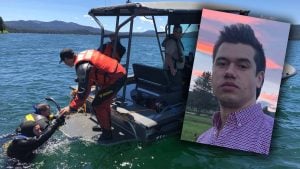 The Douglas County Sheriff’s Office said at just before 10:20 p.m. on June 30, 37-year-old Jared Bruce Boria of Vancouver, Washington put his kayak in the water and paddled onto the lake. He was not wearing a life jacket.

Shortly after Boria left the shore, 9-1-1 dispatchers received reports of a man yelling for help out on the water, but the man couldn’t be seen.

Numerous agencies responded to the lake in an attempt to find Boria. They were unsuccessful. However, his kayak, paddle, and shoes were located during a search on Wednesday. Search efforts will continue on Thursday.

Anyone recreating in the area who sees Boria is asked to call 9-1-1.