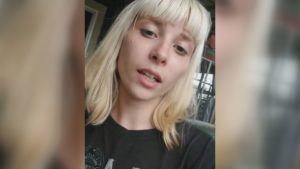 ASHLAND, Ore. — #UPDATE The body of the missing woman from Ashland has been found.

The search for a missing young woman continues on Friday.

The agency says Flowers left a relative’s home in an emotional state and may be depressed and/or confused.

She then drove to the Billing Farm area parked her car in a driveway and walked Northeast into a field.

Flower’s mother Golda, didn’t want to go on camera, but tells us she’s beside herself and fears her daughter is in danger.

She says Flowers is a free spirit who has had struggles most of her adult life. But she says this time was different since Flowers was not in her right state of mind.

Flowers is described as 5’3, 100 pounds, with blonde hair and brown eyes.

She was wearing a form fitting grey jump suit and no shoes.

If you have any information about her whereabouts, you’re urged to contact police.