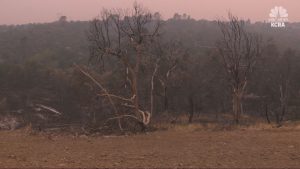 The Shasta County Sheriff’s Office has set up a hotline for family members to call if loved ones couldn’t be reached. By Tuesday afternoon, 56 people had been located safe.

Officials said they are hopeful that they will also be found. They said the homes of three people who are still considered missing are intact.

The list of missing persons began to grow after the Carr Fire swept through Redding Thursday. The blaze, which ignited July 23, has charred 112,888 acres and is 30 percent contained, as of Tuesday night.

Six people have been killed in the blaze. The fire has also destroyed 965 homes and is threatening more than 2,500 structures.