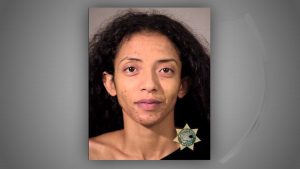 Portland, Ore. – A Seattle mother was arrested for driving under the influence and assaulting a police officer, according to the Portland Police Bureau.

Police said on May 15, they received a report of a vehicle with flat tires weaving in and out of traffic and scraping the jersey barrier on Interstate 5 near Jantzen Beach in Portland.

Once officers stopped the car, they noticed two small children crying in the back seat.

The driver, 28-year-old Amal Shariff, was asked to exit the vehicle.

Once she got out, Shariff hit an officer in the face with her elbow before police were able to place her in handcuffs.

Shariff was arrested on charges of assaulting an officer, resisting arrest, reckless endangerment, reckless driving and driving under the influence of intoxicants.

Her children were taken into protective custody and turned over to the Department of Human Services.