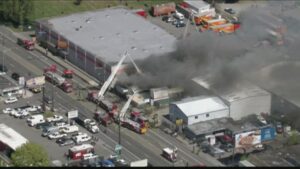 The fire was upgraded to a two-alarm in order to increase the response.

According to officials, firefighters were using three ladder trucks and ground crews to douse the flames.

No one is reported to be inside the building.

A portion of the road near the facility is closed while crews fight the fire, and the city’s department of transportation is urging motorists to avoid the area.