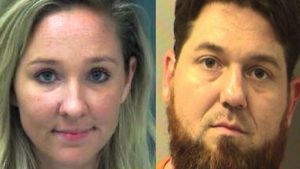 Okaloosa County, Fla. (WJHG) — Florida’s Okaloosa County Sheriff’s Office has arrested a former paramedic and, and another one turned himself in after warrants were issued for his arrest regarding a “selfie” war using patients in ambulances, some of whom were unconscious.

Christopher Wimmer, 33, of Crestview, is facing seven felonies and a misdemeanor battery charge. He turned himself in to police in Crestview Thursday afternoon.

Investigators say the two suspects used their cell phones to take selfies and videos with patients inside ambulances.

“The patients were incubated sedated and other wise unconscious. Some were over the line and made to humiliate the patients,” Okaloosa County Sheriff Larry Ashley said.

In one instance, Wimmer is alleged to have held open the eyelid of a sedated patient for a selfie. Investigators say he also posed with an elderly woman with her breast exposed.