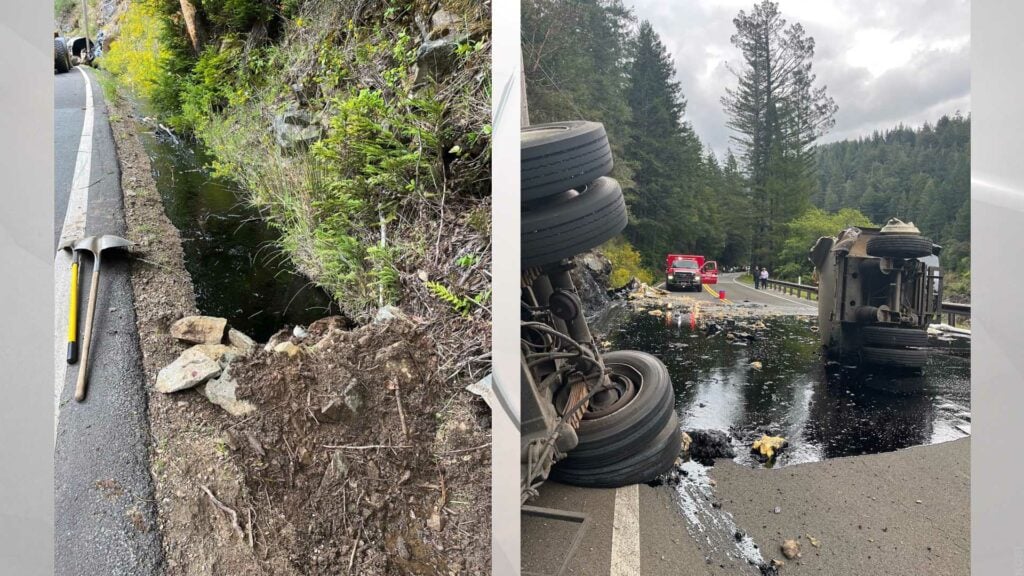 DEL NORTE COUNTY, Ore. – The driver of a semi-truck hauling a load of tar in Northern California was arrested for driving under the influence of intoxicants.

The California Highway Patrol said on Thursday, April 28, 58-year-old Raoul Payette, Jr. of Klamath Falls was driving a semi-truck with a damaged tire on Highway 199 in Del Norte County.

While in an area west of Gasquet and east of Middle Fork Gorge, the truck drifted to the side of the road and hit a power pole, causing powerlines to fall into the roadway. The semi-truck continued on for about a mile before the vehicle’s trailer detached and overturned, causing a “significant” spill of asphalt oil.

Eventually, the semi-truck was pulled over and Payette was arrested for suspicion of driving under the influence of intoxicants.

The U.S. Forest Service said tar from the truck entered the Smith River. However, because it was “hot tar,” much of it solidified when exposed to the cold river.

Six Rivers National Forest said, “Although we are still concerned with possible harm done to natural resources, knowing more about the substance re-assures us the spread of liquid material in the river is minimal.”