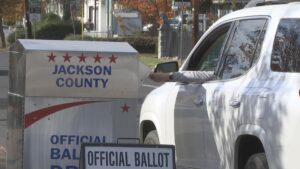 MEDFORD, Ore. — One day after Senator Ron Wyden was in the Rogue Valley talking about the importance of a strong mail system, Oregon’s Junior Senator Jeff Merkley is speaking out about the issue.

Senator Merkley says any attempt to manipulate the mail to affect the November election would be the act of an ‘authoritarian government.’

The senator’s comments come a day after Postmaster General Louis DeJoy announced the U.S. Postal Service will suspend any policy or operational changes until after the November presidential elections.

The president claims voting by mail could lead to widespread fraud, but has provided no evidence.