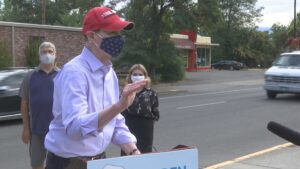 MEDFORD, Ore. — On Tuesday, Oregon Senator Ron Wyden was in the Rogue Valley speaking out against what he’s calling ‘voter suppression’ efforts.

As the nation’s first U.S. senator elected by mail, Senator Wyden says he’s concerned about President Trump’s efforts to dismantle or weaken vote by mail systems across the country.

The president claims it could lead to fraud.

Postmaster General Louis DeJoy has since announced the U.S. Postal Service will suspend any policy or operational changes until after the November presidential elections.

“Anything you can do to tell people to vote early… what’s on the line right now, this election, is democracy,” said Senator Wyden.

Senator Wyden also expressed concern about elderly residents and the sick getting medication by mail.