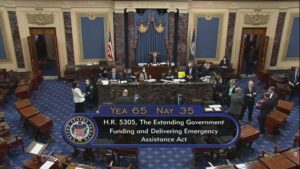 WASHINGTON, D.C. (NBC) – The Senate has voted 65-35 to pass a bill to avert a government shutdown set to take effect at the end of the day Thursday.

The bill, which funds the government through December 3, now goes to the House which is expected to pass it.

15 Republicans joined all 50 Democrats voting in support of the bill.

Three GOP amendments to change the bill, including an amendment to add funding For Iron Dome that was stripped out of a previous funding bill that was passed in the House, failed to be added to the measure.