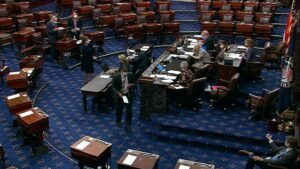 WASHINGTON, D.C. (NBC) – The Senate on Wednesday approved a measure to restore an Obama-era rule cracking down on methane emissions in the oil and gas industries.

The move is part of the Biden administration’s push to combat climate change.

It was a mostly party-line vote with 52 in favor and 42 opposed.

It now moves to the House of Representatives.