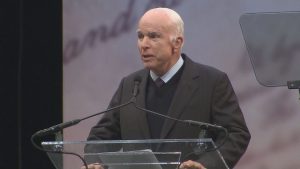 The Arizona Republican was diagnosed with an aggressive glioblastoma last year and actively sought treatment for months.

But Friday, his family released a statement about his prognosis.

The McCain family wrote, “John has surpassed expectations for his survival. But the progress of the disease and the inexorable advance of age render their verdict.”

The statement goes on to thank his caregivers, friends, and those who have prayed for him over the year.

McCain ran for president in 2008 and has long been a leader in the Republican Party.