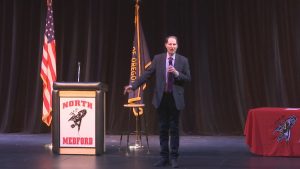 MEDFORD, Ore.– Senator Ron Wyden was in Medford Wednesday as part of his effort to hold a town hall meeting annually in all 36 Oregon counties.

Wyden answered questions at North Medford High School in the morning from both high school students and the community. Topics ranged from wildfire prevention to public land protection and education.

While some community members received answers to their questions, others felt the senator could have been more defined.

“I’m a little taken back that he doesn’t talk much about the LNG,” said Ashland resident Greg Walter. “It wasn’t covered adequately but I think he’s doing overall a really really spectacular job on our public lands and as our representative on a host of issues.”

Wyden touched on the local issues pointing out some of the bills he helped to pass that would benefit the state and the Rogue Valley. But he also took on national topics such as climate change and immigration.

“I’m going to work for common-sense approaches in border security,” said Wyden discussing the president’s recent decision to declare a national emergency to build a wall at the U.S./Mexico border. “The wall doesn’t meet that test now, it isn’t going to meet it in the future and I will continue to oppose this wall.”