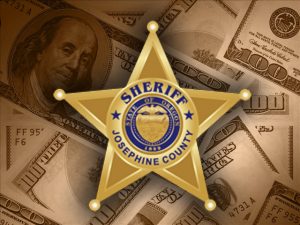 According to Josephine County Sheriff Dave Daniel, the county is estimated to receive four million dollars over the next two years.

Daniel says he isn’t sure where the county will allocate the funds, but says he started working with his staff Friday to get ideas on how the department can best use the influx of cash.

Daniel says since the bill is still new the exact amount the county gets is still up for negotiation. However, he does know he wants to make his portion of the money last.

“We will probably try and prolong instead of spending it all in two years, Sheriff Daniel said. “We might try and extend it to four years for a little bit of foundation but exactly where the money will go is not determined yet.”

While Daniel says most of the money will likely go to the sheriff’s office, some funds could go toward the district attorney’s office and the juvenile justice shelter.

Daniel says he’ll be asking for citizens and county commissioners’ input before any decisions are made.