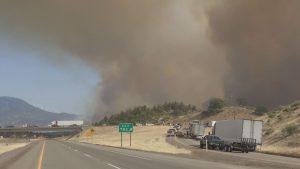 The fire sparked in Hornbrook on July 5th, quickly growing to more than 38,000 acres.

District Attorney Kirk Andrus says suspect John Skoda of San Francisco was arrested and booked on a laundry list of charges including arson and involuntary manslaughter.

He turned himself in to the Siskiyou County Jail yesterday. He says Skoda called 911 the night of the Klamathon Fire while on the South side of Copco Road in Hornbrook.

He says Skoda was burning household debris and alerted authorities of the fire, which quickly grew out of control.

“We’re not going to be able to bring closure to everybody. I mean somebody lost their life to something that appears to be reckless, but not intentional,” said District Attorney Kirk Andrus, Siskiyou County. “So, it’s not always satisfying going through the criminal justice system because we can’t restore to the victim what was lost.”

Skoda was booked at the Siskiyou County Jail yesterday.

He entered a not guilty plea and was arraigned on charges that include involuntary manslaughter, arson, burning without a permit, and failing to prevent the spread of a fire.

The judge released Skoda from custody without requiring bail. He’s scheduled to be back in court next month.