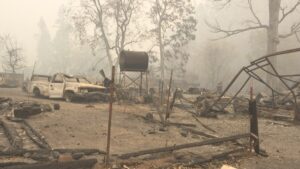 Between the two fires, USFS says more than 166,000 acres burned.

Two people died as the Slater Fire tore through the community of Happy Camp, according to the Forest Service. It also says 197 residences burned.

Even though the fires are contained, USFS says there are still hazardous conditions in the burn scars. Dead trees are near road ways, and in high heat areas it says there is unstable soil.

The cause of both fires remains under investigation.