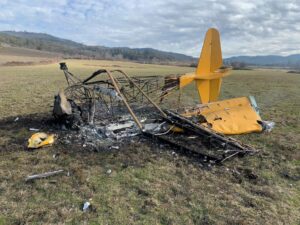 JACKSON COUNTY, Ore. — Firefighters and first responders were dispatched to a small plane crash off Meridian Road outside of Eagle Point.
At about 11:45 a.m. Thursday, an older single-engine plane carrying two men in their 20s crashed in a field west of White City.
The plane reportedly caught fire and burned almost entirely.
First responders said the men were able to make it out of the wreckage with serious, but not life-threatening, injuries.
So far, no cause for the crash has been determined.