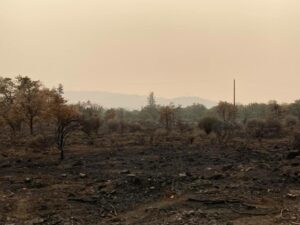 JACKSON COUNTY, Ore. – Smoke could still rise from the interior of the South Obenchain Fire even though it’s considered completely contained.

The wildfire started near Eagle Point on September 8. It triggered evacuations in the area as it grew in the area between Shady Cove and Butte Falls.

Before fire activity calmed down in the following days, the fire destroyed 33 structures.

About one month after it started, the South Obenchain Fire was 100% contained at 32,671 acres in size.

On October 8, the Oregon Department of Forestry’s Southwest Oregon District said even with complete containment, it’s not uncommon for smoke to pop up once in a while. For that reason, ODF has regular patrols looking out for potential flare-ups.

According to ODF, smoke may continue rising until a good rain shower.