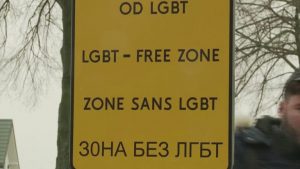 A number of villages and municipalities across rural Poland have voted to declare themselves free of “LGBT ideology.”

The head of the town council in one village voiced anger at the possibility of the European Union withholding funds to the village because of its anti-gay stance. He asked, “Isn’t this discrimination? Is this what European tolerance is about? I don’t think so,”

Andrzej Duda, who was re-elected as Poland’s president Sunday, pledged to ensure gay couples would not be able to adopt children and to prevent gay rights education in public schools.

The town’s veterinarian, who is a proud lesbian, said homophobia is on the rise. She has been cursed and pushed on the bus.

She and other activists are fighting back by posting mock signs reading “LBGT free zone” on village signs.

Poland joined the EU in 2004 and thousands of its towns have received $41 million in aid.

New EU funds to help improve towns’ standards of living may be in jeopardy.