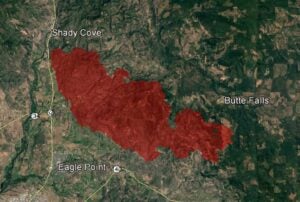 JACKSON COUNTY, Ore. – Nearly a week after it started, the South Obenchain Fire continues to threaten the communities of Shady Cove and Butte Falls.

The Bureau of Land Management said the fire started on the afternoon of September 8 about five miles east of Eagle Point. Since then, it’s grown to an estimated 32,031 acres. At the time this article was published, it was 20% contained.

The fire reportedly made a small push to the east, but the night shift was able to stop forward progress and crews will work to establish a containment line in the area.

“We have taken advantage of the weather and smoke cover to reduce loss of property and resources,” said Northwest Incident Management Team 8 Deputy Commander Kevin Stock. “I really want to thank everyone for their hard work to get us to this point.”

Even with the relatively positive news about the fire, Shady Cove and Butte Falls remain under Level 3 (Go!) evacuation notices.

Updated information about the South Obenchain Fire can be found at https://inciweb.nwcg.gov/incident/7185/