Hurricane Ian first struck the Fort Meyers area as a devastating category four, on September 28th. The emergency prompted volunteer organizations from across the nation to assist with recovery efforts.

One of the organizations, Reach Out WorldWide (ROWW), helped out in the hard-hit area. The non-profit, started by late actor Paul Walker, responds to natural disasters since the earthquake in Haiti in 2010.

Rector, who has been part of ROWW since 2015,  told NBC5 that their specific mission was protecting content in homes, and preventing extensive flood damage.

“It truly is one of the best feelings in the world to be able to go down there and help these people who have quite literally lost everything,” Rector said. “We were primarily trying to help people that were either low income, elderly or non insured.” 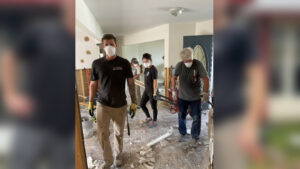 Rector stated that because the three attended, ROWW was able to extend its deployment in Florida for a few weeks.

More details about the organization can be found here