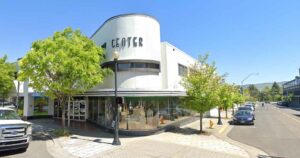 SOHS said the historic building at the corner of North Central Avenue and E 6th Street was originally built for J.C. Penney in 1948. Most recently, it was leased to Kid Time Children’s Museum. However, Kid Time moved to the old Medford Carnegie Library, leaving the 26,000 square foot SOHS building empty.

On September 6, SOHS announced plans to remodel the history center headquarters and make it an event center available to the public.

SOHS President Douglas McGeary said, “With the recent sale of Inn at the Commons, and the apparent closure of that facility’s event rental spaces, a vacuum exists in Medford for locations for events such as weddings and large meetings. Following numerous inquiries from parties interested in renting portions of our building, our Board of Trustees decided that creating a permanent event center would both well-serve the community and SOHS.”

The historical society said funds will have to be raised to pay for the estimated $1.2 million conversion.

Additional details about the event center plans will be shared during a 75th-anniversary dinner at Edenvale Winery on Saturday, September 11. Tickets to the dinner are available at http://www.sohs.org/dinner75.