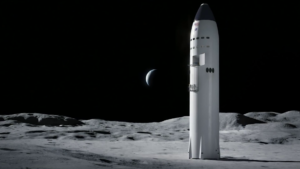 The rocket company led by Elon Musk has clinched an almost $3 billion deal with NASA.

The agency will use a spacecraft being developed by SpaceX, called “Starship,” to land astronauts on the moon.

All starship prototype test flights so far have ended in rockets blowing up but the company is rapidly building new test vehicles and NASA will keep a close eye on the future development.

Friday’s announcement is a defeat for a competing lunar lander design which involved Blue Origin, a company led by Amazon founder Jeff Bezos and another design by Dynetics.

NASA plans to land astronauts on the moon again by 2024, as part of its Artemis program.