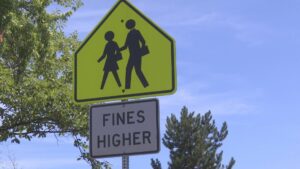 MEDFORD, Ore. — School starts on Tuesday for thousands of kids across the Rogue Valley.

Although many districts are going virtual for the first six weeks, speed limits around school campuses will still be enforced.

Grants Pass Department of Public Safety says it will have officers patrolling near bus stops and cross walks.

It says speeding violations have gone up substantially during the pandemic and it wants to make sure drivers are extra cautious.

“When you’re approaching a school zone that’s clearly marked, please make sure you pay attention to the signs because it will give the time perimeters that are there because there’s different times for different schools,” said Captain Jim Hamilton, Grants Pass Dept. of Public Safety.

While the Medford School District will be going virtual, that doesn’t mean kids won’t be at school a few hours a day for limited in-person instruction.

The Medford Police Department says your safest bet is to always drive the posted speed limit in a school zone.

As a reminder, speeds are reduced to 20 miles per hour in all school zones.

Most are in effect from 7 am to 5 pm on school days.

Drivers are also required to stop for all school buses if they are stopped with flashing red warning lights, even if you’re driving in the opposite direction.

The only exception is when there’s a full physical barrier separating the two sides of the street.

If you’re caught speeding in a school zone, the fine doubles.