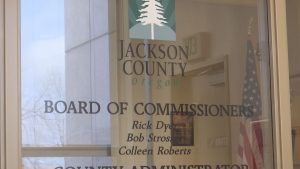 MEDFORD, Ore. — Jackson County commissioners declared a local state of emergency Thursday morning due to what they say is a “foreseeable lack of adequate resources.” Commissioners said this will help the county respond to basic needs like health, safety and emergency services. But at the same time, it’s not clear if their decision will change anything.

Asante and Providence haven’t revealed how many people they’re losing come the October 18th vaccination deadline, but Oregon Nurses Association representative Susan Bruce said last week about eight percent of nurses will leave or be placed on leave at Asante Rogue Regional. “About 81 of our ONA members will not be at the bedside any more after October 18th,” said Bruce.

Both health systems told us this week, they were not involved in the county’s decision.

“A lot of the decisions that come down from the state have changed and varied as time rolls out and it would be a true blessing if that worked out this time as well,” said Commissioner Colleen Roberts. “It’s not about the vaccination, it’s about the right to choose.”

But not all of the commissioners were on board with the decision.

“I’m interested in us taking actions that will have impacts, that will change things, and I don’t see this resolution as doing that. Will this or will this not have an impact?  The answer is, it will have no impact on the mandate itself,” said Commissioner Dave Dotterrer.

Commissioner Roberts said she hopes the declaration has an impact on the governor. The governor issued the mandate herself through an executive order, so that appears unlikely.

“It is the one tool we have in communication in communicating our concern for the health safety and welfare of our citizens,” said Commissioner Roberts.

Commissioner Rick Dyer agreed saying, “I do think there is value in this, whether its effective or not remains to be seen, but I really do see value in what we’re doing. I hope this plea is listened to and heeded. But its necessary we need to sound the alarm.”

President Joe Biden announced earlier in September, companies with 100 or more employees will have to make sure it’s employees are fully vaccinated or tested regularly. That means even if the governor agreed with commissioners, when this federal order becomes law in November, it will no longer be in her hands.