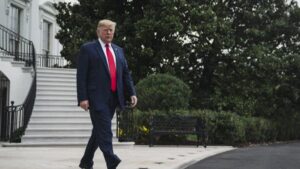 WASHINGTON, D.C. (NBC) — The president appeared to back-track overnight and support some stimulus for the economy. It comes just hours after abruptly calling off talks on Twitter, saying there will be no relief until after Election Day.

President Trump later tweeted, “If I am sent a Stand Alone Bill for Stimulus Checks ($1,200), they will go out to our great people IMMEDIATELY. I am ready to sign right now. Are you listening Nancy?”

It was just one in a series of tweets, many where the president went after debate moderator Chris Wallace, the FDA, and Nancy Pelosi. A senior administration official told NBC News while a “large-scale stimulus package is on the sidelines,” the White House backed a series of smaller, individual deals even though Pelosi has already said a piecemeal approach won’t work.

House Speaker Pelosi was asked earlier on Tuesday about why the president is doing this. She said, “I don’t know why the president does much. It’s unfortunate, and we won’t have a stimulus bill, and he won’t win the election so we don’t have to wait for that to happen.”

After President Trump seemingly killed any movement on a coronavirus relief bill, leaving many Americans in limbo, it tweeted instructions to his team “to stop negotiating until after the election when, immediately after I win, we will pass.” It went markets into a spiral.

Pelosi had been in talks with Treasury Secretary Steven Mnuchin for months after a deal to help people hit hard by the pandemic. Things were moving slowly, but still moving with Federal Reserve Chair Jerome Powell warning of “tragic” economic risks if the government doesn’t do more.

Still, not long after a phone call with Mnuchin and key Republican leaders, the president pressed pause and pressed “send” on that tweet just as Pelosi was on a conference call with Democrats.

According to a source on the line, she suggested the steroid medication the president is taking after coronavirus diagnosis may be affecting his judgment.

Top Republican Senator Mitch McConnel accused Democrats of playing politics. He told Fox News, “They didn’t want to get a deal this soon. We will reengage after the election, as the president said. I think we do need another rescue package but because of the impending election we simply weren’t able to get together.”