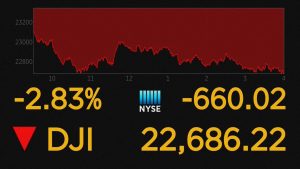 The U.S. stock market closed down with the Dow Jones sinking by 660.02 points.

A weaker-than-expected reading on U.S. manufacturing led to the decline along with Apple shares.

The iPhone maker traded down as much as 707.73 points, marking its biggest percentage drop since 2013.

The ongoing trade war between Washington and Beijing has intensified fears that the global economy may be slowing down.